After completing the survey, your respondents are assigned to a wealth quintile.  A quintile is 20% of the population. If a population has 1,000,000 people in it, you could separate it into five quintiles of 200,000 each. If someone is in the bottom wealth quintile, they are among the poorest people in the country. If they are in the top quintile, they are among the wealthiest. The EquityTool tells you which quintiles your beneficiaries are in so you can see if they are relatively rich or poor.

In addition to showing you how your beneficiaries compare to the rest of the country, the EquityTool can also provide results in comparison to the urban population only. The interpretation is the same, but the urban only comparison is most relevant if your services, or your population, is concentrated in urban areas. See our guide to urban-focused surveys for more information.

Results are provided as a number – 1 through 5 – representing each of the 5 wealth quintiles.  Quintile 1 is the poorest quintile, and quintile 5 is the wealthiest.  Although the national population is equally split into 5 quintiles, it is not expected that your respondents are distributed equally.  A distribution that could be considered ‘pro-poor’, or more heavily skewed towards the poorer is seen below in Figure 1. 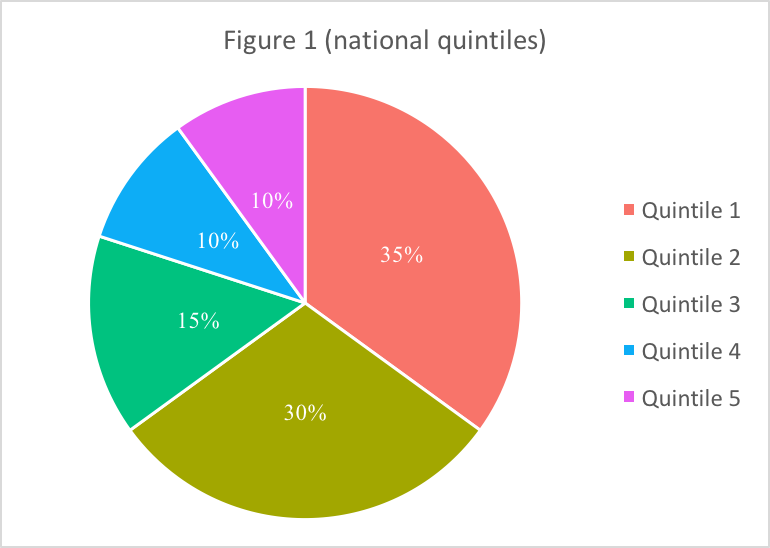 Again, interpretation depends greatly on context. Where were the respondents found? If the survey occurred in a shopping center, university, or private hospital, these results may be very plausible. By contrast, if they occurred in an ‘urban slum’ area, which is considered poor by others, then the results may be perplexing.  In such a case, we would recommend that you also look at the results as compared to urban residents only.

Figure 3 indicates how the same people from Figure 2 may appear poorer, when you compare them only to other urban dwellers rather than to the whole country. 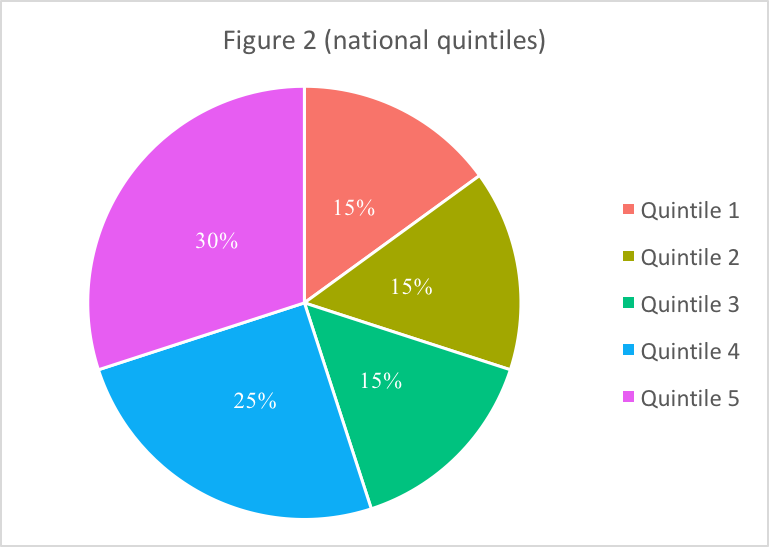 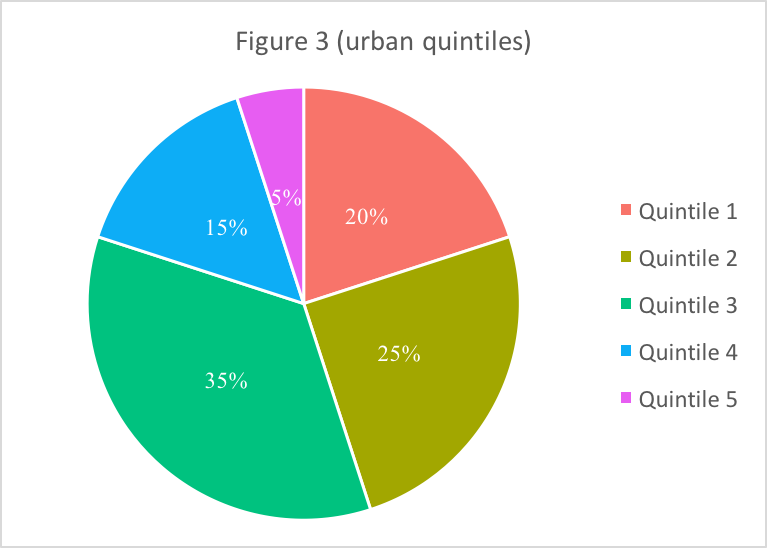 In general, those who live in urban areas are wealthier than those who live in rural areas. When we use wealth indices to compare relative wealth, it is important to consider the context in which the survey was given.

Below is an annotated version of the EquityTool report generated when a  survey is conducted through the web-based app. Hover over the ‘i’ icons to learn more.

Important considerations when interpreting your results:

Relative, not absolute, wealth: The wealth index is a measure of relative wealth rather than income, so the EquityTool will not tell you the proportion of respondents that live below specific absolute poverty lines. It should be noted that, in some countries, people in the middle or second highest quintile may still be poor in absolute terms, even though they are wealthier than most people in the country. A good example of this is Madagascar, where about 80% of people are thought to live below the World Bank poverty line of $1.90 per day. This means that people in the bottom four quintiles are living below the World Bank poverty line.

Age of surveys: the wealth index is based on asset ownership and household characteristics. These things can change over time. For example, it may be that only the top quintile owned refrigerators in 2010, but in 2015 the top two quintiles own refrigerators.

Reference population: the wealth index is based on DHS, MICS, and other national surveys. It tells you how wealthy a person is relative to the rest of the country, or relative to the urban population in the country. If you would like to compare your respondents to a specific sub-group in the country, such as the population of a specific region, then you may need to run an analysis on the DHS dataset to create a scoring system for that specific group. If you would like guidance on how to do this yourself, or assistance with doing analyses, please let us know via our contact page or equitytool@m4mgmt.org.

See how other organizations have benefited from the EquityTool.